7 Reasons for Companies to Relocate to Cleveland 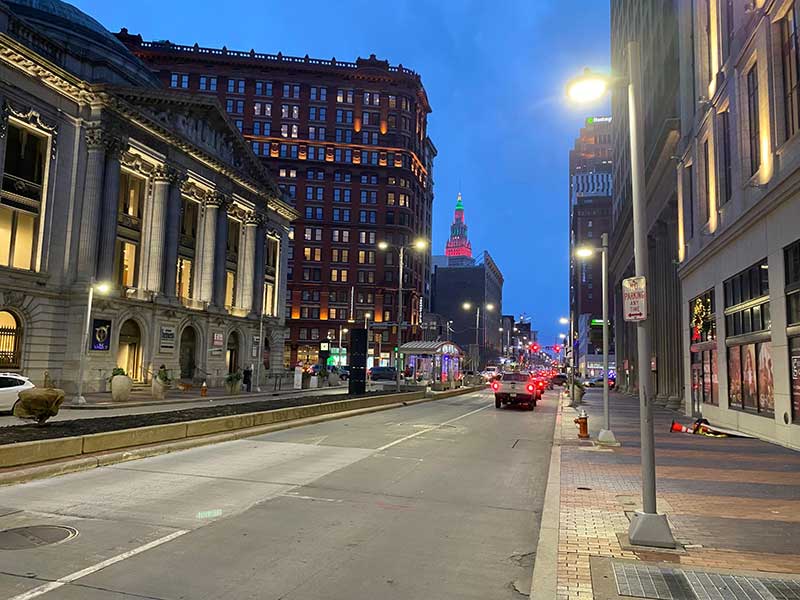 You’ve probably heard all the jokes, so let’s just get this out of the way now. Yes, the Cuyahoga River did catch on fire – like 50 years ago!?  If you haven’t been to Cleveland in a while, it’s a city on the rise.  It’s not your “parent’s Cleveland” anymore and if you are thinking about moving your business or expanding to a new location, here are a few reasons we believe there’s no better place than the crown jewel of the north coast – Cleveland, Ohio to build or renovate your next commercial building.

A huge benefit of Cleveland is the geographic layout. Although technically not all Cleveland, the city is divided into 4 areas: Eastside, Westside, Southside, and of course, downtown which serves as the dividing point. Major interstates I-71, I-77, and I-90 make access in and out of downtown easy and traffic relatively light. If you’re looking for warehousing or manufacturing facilities, you can get a lot of bang for your buck in the suburbs.

Compared to other comparable cities, Cleveland rush hour is a commuter’s dream.  Ask anyone who has been to Boston, Chicago, Los Angeles, or New York how “good” our traffic is compared to theirs! With 5 major traffic arteries flowing to and from downtown Cleveland out to the suburbs.  Aside from a major sporting event or big accident, you can usually navigate in and out of the city without too much delay.

Some say the city of Cleveland is behind the curve when it comes to modernization. There may be some truth to that statement, but one thing it has created is a lot of opportunities for commercial construction rehab and reuse ventures – particularly commercial to residential and multi-use applications. If you come downtown, you’ll see rehab projects and new buildings going up all over the city. Developers and investors are feverishly working up deals to acquire these old commercial buildings and transformed them into high-rent residential condos, apartments, and retail spaces.

Despite being considered a “small major city”, some of the largest and most recognizable companies in the world are headquartered in northeast Ohio. Depending on the type of business or industry you bring, you will have the opportunity to rub elbows with names like Sherwin-Williams, KeyCorp, Parker-Hannifin, Progressive Insurance, Gojo/Purell, and Goodyear!

To help revitalize and incentivize growth, there are some nice opportunities for tax abatements and credits at both the state and local level that translates into significant savings. For instance, as of this writing, the city of Cleveland is offering a 15-year tax abatement’s on conversions of non-residential buildings into multifamily dwellings. These abatements require meeting Cleveland Green Building Standards, but a company experienced in sustainable building like us can help you out with that!

With all three sports teams Downtown, The Cleveland Browns, Cleveland Cavaliers, and Cleveland Guardians bring fans into downtown Cleveland year-round.  If you’re in the restaurant or hospitality business, the city presents huge opportunities.

Perhaps one of the biggest incentives to build commercially in Cleveland is that the cost of living is significantly lower than that of major cities in the U.S. From housing and average salary to groceries and entertainment, you can get a lot more for less as compared to similarly populated cities in the country.

Clearly, we’re biased being Clevelanders ourselves. But relocating your operations to Cleveland where there’s a lower cost of living, tax break opportunities, and the ability to get more for less seems like a business no-brainer!

If you’re interested in exploring a commercial building opportunity, reach out to one of the area’s most respected construction companies in Cleveland, Fiorilli Construction!